Sloan Sheridan-Williams, celebrity life coach and founding editor of SLOAN!, was a VIP guest at this year’s Extreme Sailing Series™ Act 6 in Cardiff. After the thrills and spills of the competition, SLOAN! interviewed Martin Evans, Mainsail Trimmer of Team Wales, the local wildcard in the competition for his onboard insights into the headline Act of the Cardiff Harbour Festival.

Sum up exactly what the Extreme Sailing Series™ is all about

The Extreme Sailing Series is a professional sailing circuit that takes high-performance, hydro-foiling catamarans to top racing destinations around the world every year. Part of the ethos of the Series, now in its 12th edition, is to bring the sailing close to the people, providing great action to watch from the shore and making the sport more accessible and attractive to fans, sponsors and media. 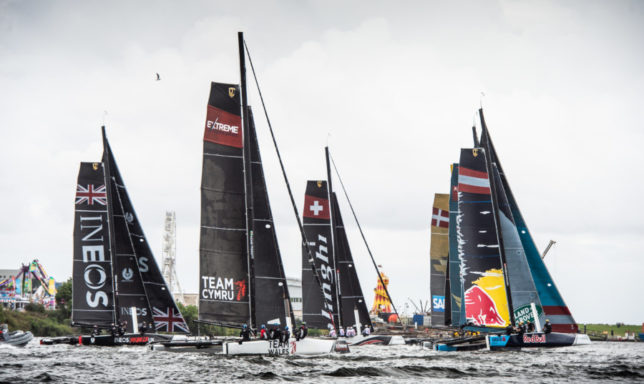 Explain a little about the boats that race on this circuit

The class of boat is the GC32. It is a multihull which is 12m long and 6m wide but weighs less than a small car. It is constructed from carbon fibre, which makes the boat strong, super light and fast. The boat is fitted with hydrofoils that lift it out of the water when it gets to a certain speed. When the boat lifts up, drag reduces and the boat goes even faster – well over twice the wind speed! The GC32 is incredibly physical to sail and a tough beast to tame. That being said, when you get it right it’s a truly awesome, exhilarating experience to be on board. 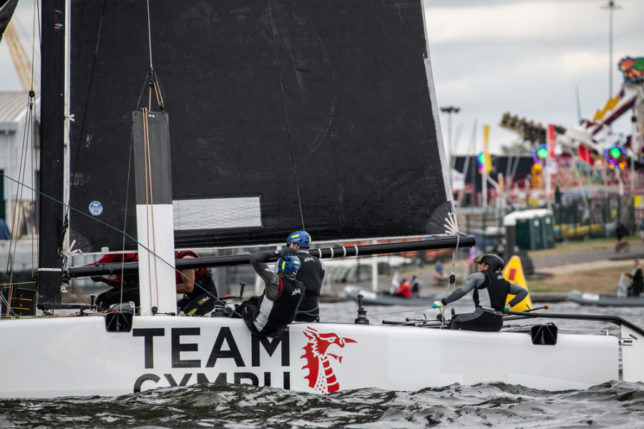 What about the level of competition?

The sailors that race on the Series are some of the best in the world. You’re racing alongside Olympic gold medallists, America’s Cup sailors and round-the-world yachtsmen coming from different countries; the list of credentials is phenomenal. On top of that, foiling is taking the sport by storm and the Extreme Sailing Series represents the leading edge of the revolution from a racing perspective. That means Extreme Sailing Series teams are pushing the boats and each other harder than ever, which makes it all to play for at the top. 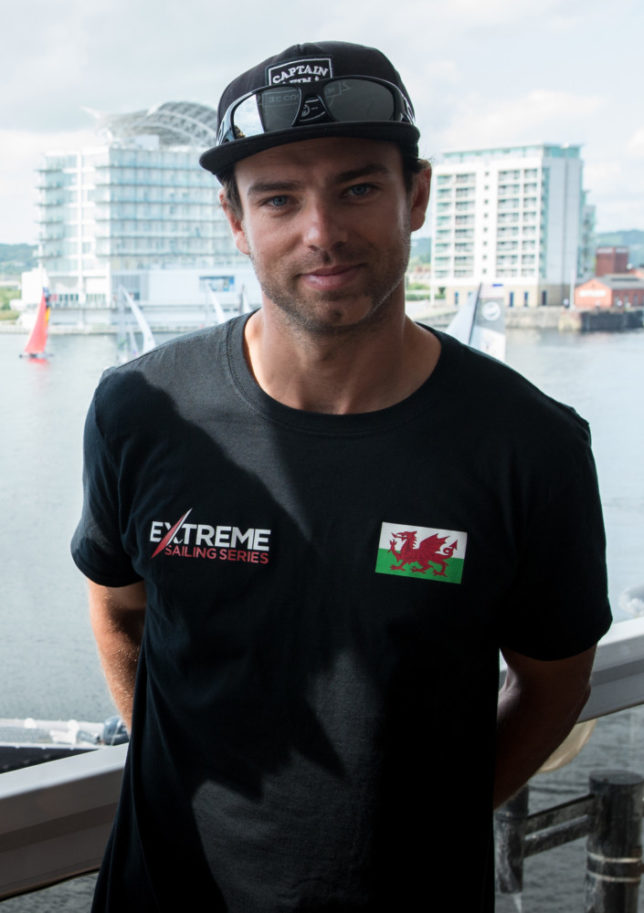 Tell me a bit about Team Wales and your crew

Team Wales is a new crew consisting of two Welsh sailors (myself and Gareth Fowler) and three English sailors. Onboard we have a number of National and European titles in various classes as well as a 49er Olympic representative with Alain Sign, who trims the headsails. Adam Piggott steers the boat – he is an Extreme Sailing Series veteran and catamaran specialist. Gareth Fowler does the main trim – he is an all-rounder that has campaigned a number of high-performance keelboat classes. Peter McCoy does the boards – he is a young Finn sailor and physical powerhouse. Finally, I control the board rake and do the bow, which is a very physical job. My background is in the Laser class and more recently performance keelboats. The team has a lot of sailing experience that we need to focus on the specifics of the GC32. The more time we spend together, the more fluid our racing becomes and the more competitive we get with the leading teams. 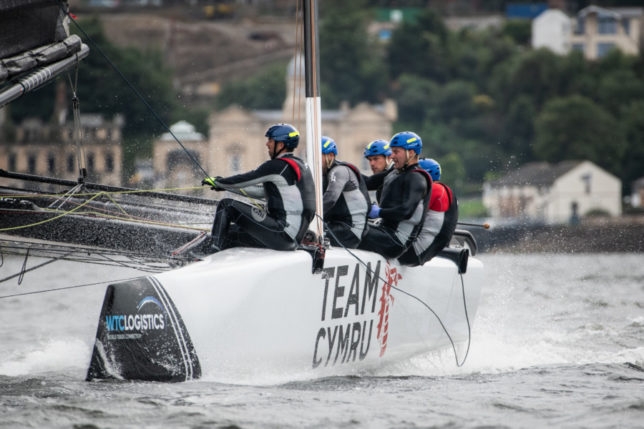 Cardiff is my favourite venue on the circuit. For GC32 racing, it’s pretty small! The wind comes from the land no matter the direction. It’s shifty, gusty and often can’t be seen on the water until it’s almost upon you, which provides a real challenge. Small courses are seriously physically demanding and often difficult for new teams like us because there is so much pressure on manoeuvres. Despite that, the reason I love Cardiff is because the racing for the fans onshore is spectacular. It’s so close you can even hear the sailors speaking to each other, so when we fly by at top speed the spectators can gain a real appreciation for what we do, even if they’re new to sailing. When it’s windy like it was over the last few days, the spectacle gets better and better and you can always rely on the people of Cardiff to give us a cheer and get involved when things get dicey. 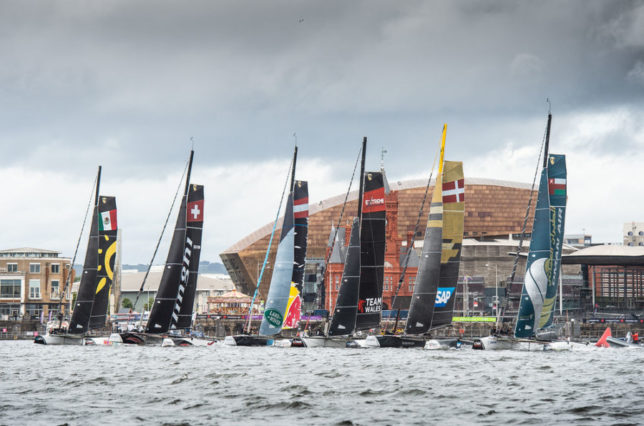 Your team had a capsize on the penultimate day of racing – what was it like onboard?

I had stepped off the boat the race prior to the capsize as I’d been suffering from a bit of illness. I was pretty shocked to turn around when I got to shore to see the boat upside down! The event was a baptism of fire for the new guys when the boat was racing, so upright, so to capsize really chucked them in at the deep end. Capsizing can be dangerous, but in most cases, everybody comes out unscathed. From speaking to the guys, the boat got caught by a strong gust and onboard it was all dealt with smoothly and the safety team on the water was very efficient dealing with it. A quick role call checked they were all OK and not injured and after that, I think they would have had a moment to let the adrenaline subside and take it all in whilst the safety crew got to work righting the boat. It certainly is a great story to be able to tell but in the moment, the first concern is the crew, then the boat and then making sure you’ve learnt so you don’t do it again! 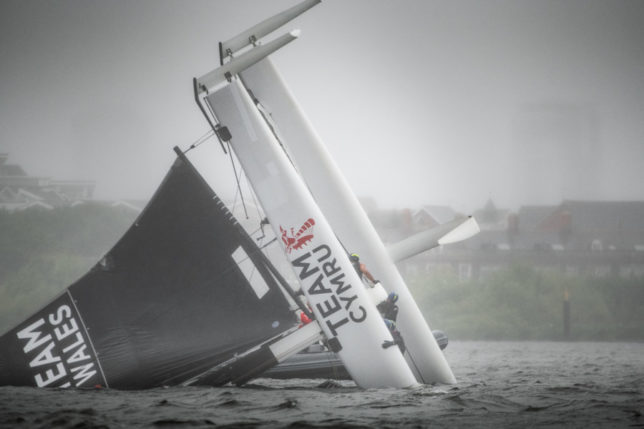 You had to stop racing and return the boat to shore – was there much damage to the boat? What happens in these situations if the boats need to be repaired?

When the boat came ashore there was some damage to the boards. One of them needed to be removed and taken ashore for overnight repair. The boards need to be smooth and strong. Any defects slow the boat down and cause instability when flying. Teams spend hundreds of hours preparing their boards throughout the season, which shows how critical it was to get them fixed. 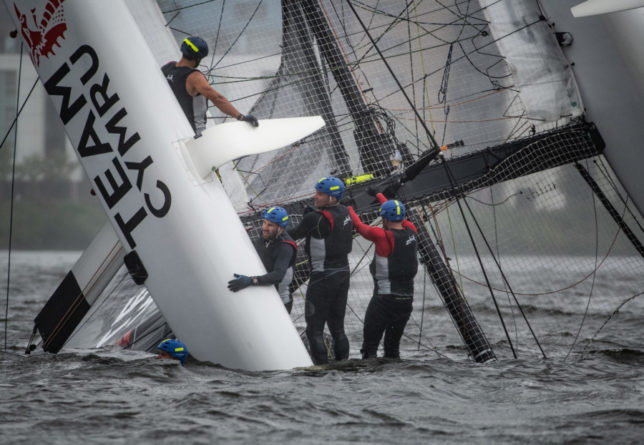 Were you pleased with your team’s performance overall?

Overall we can be happy with ourselves. Cardiff is probably the most testing course, especially in the wind we had, so we can come away pleased with our progress and improvement as the event went on. Our goal was to be in the mix with the top teams and we proved that we were capable. We led a few races and took some scalps here and there. It would be awesome for Team Wales to continue the progress and get the opportunity to race at other Acts too; we were a wild card team in Cardiff.

Affirmation – I endeavor to be adventurous

The Science Behind Willpower